Following on from their critically acclaimed Sold-out productions – Dirty Laundry and Hot Lane – Stoke-on-Trent based Claybody Theatre Company will once again transport the city’s iconic Spode Works for the premiere of Deborah McAndrew’s new play about Stoke’s major dual carriageway – The D-Road.

Written and directed by award-winning husband and wife team of Deborah McAndrew and Conrad Nelson, The D-Road will premiere from the 16-26 October at the Spode Works which is located right next to the A500 – the perfect location for the exciting new site-specific play.

A house stands marooned on a forgotten island of land somewhere between the railway, the Trent and Mersey Canal, and the D-Road. It’s where Liam lives with his Nana.Liam and his girlfriend, Lois, dream of the bright lights of Manchester, but how can they leave Nana, with her very peculiar phobia? Then a charismatic stranger turns up at the door. Who is he? What does he want? And why is he so interested in the Nana’s back garden?

The A500 – known locally as the D-Road – is a major primary road in Staffordshire and Cheshire, England. It is dual carriageway for most of its length and connects Nantwich, junctions 16 and 15 of the M6 motorway with the city of Stoke-on-Trent. In 2004 the road was stated as carrying 60,000 vehicles a day through Stoke. It was built to provide links between Stoke-on-Trent and the M6, before being extended to Nantwich. Construction has taken place over several stages, beginning in 1962, with the final section of the original route being completed similar to the original plans in 2006. As a trunk road it is maintained by the Highways Agency.

Playwright Deborah McAndrew said: “You don’t have to live long in North Staffordshire to realise the A500 (D Road) is a significant cultural and economic landmark for people living in Stoke-on-Trent and the surrounding area. I’ve been ruminating on a play inspired by this iconic local road for quite a while. The story centres around a modern family, living in close proximity to the road and with complex feelings about it. It’s a light and entertaining show, addressing some serious themes, and reflecting the relationship that many people in the city have with the D-Road, and how we all feel about roads and their meaning in our lives.”

Director Conrad Nelson said: “When it was being built the A500 brutally cut through the urban landscape and chewed up whole streets and communities. It features in every radio traffic bulletin on a daily basis, but it’s hard to imagine how the area would function without it. Claybody Theatre’s mission was to create exciting live drama that focuses on the unique culture and experience of Stoke-on-Trent. When we announced that our next production would be about the D-Road the response was phenomenal.”

Claybody Theatre is a Stoke-on-Trent based company whose work is inspired by the lives and experiences of local people. Founded by playwright Deborah McAndrew and director Conrad Nelson, the company’s work includes the highly successful Ugly Duck, first performed at the Burslem School of Art and then at the New Vic Theatre; Digging In, a play for schools about children of mining families during the 1984-5 Miners’ Strike; and Dirty Laundry, a domestic thriller presented in Spode last year (2017) and last year’s Hot Lane.

**The D-Road will premiere at the Spode Works in Stoke-on-Trent from 16-26 October. For tickets and information go to www.claybodytheatre.com 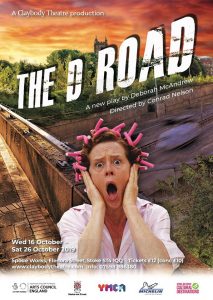 Monday’s (March 30) episode of the popular Channel 4 reality TV show Four in a Bed features the Potbank Aparthotel in Stoke...

Residents at Belong care village in Newcastle-under-Lyme and others in the group operated by not-for-profit care provider Belong,...

The owners of a gin distillery in Newcastle-under-Lyme have switched from producing gin to hand sanitiser during the Coronavirus...

Outdoor markets at council-run locations across the city have closed, and new requests for bulky waste collections have stopped,...

Residents are being encouraged to get behind a new community support scheme which has been set up to help meet the everyday needs...

Council provide information for those who cannot work due to Coronavirus

Stoke-on-Trent City Council has produced a range of information covering rent and financial advice for tenants who cannot work due...

The Potters ’Arf marathon has been cancelled as civic leaders urge residents to follow social distancing health advice, in...

Burslem based charity Helping Angels are appealing for anyone who could help to donate essential items which they need to continue...