The Call with Claybody Theatre

Following on from their highly successful podcast Dirty Laundry earlier in 2020, Claybody Theatre have taken an opportunity during lockdown to develop their digital work with a brand new five-part audio drama series – THE CALL.

Creative Director, Deborah McAndrew, has teamed up with four other writers to create stories centred around a fictional radio station in Stoke-on-Trent called Kiln Fm. Mark Benton (Shakespeare and Hathaway, Waterloo Road, Strictly Come Dancing) stars
as Sam Griffin, presenter of Kiln FM’s flagship Breakfast Show. Along with Drive Time it’s the only locally produced show for the station, and under threat from big media owners.

Over five fifteen-minute episodes follow the story of Sam and his studio producer ‘Harri’ and a mystery caller who keeps ringing into the station, asking to speak to Sam. Each episode also has an individual story of the day, connecting a listener to the radio show. The fictional radio station is sponsored by Stoke-on-Trent business KMF and director Conrad Nelson has worked with local musician and Robbie Williams composer, Scott Ralph to create a set of jingles and adverts for the Sam Griffin Breakfast Show.

Director Conrad Nelson said: “In this time of crisis, with live theatre impossible, we still wanted to carry on making drama somehow. In difficult times we turn to the arts to get us through, and it was really important to us that we were able to make something for our audience. As it happened we had just recorded our first drama podcast Dirty Laundry at the beginning of the year, and this was scheduled for release in April – at the start of lockdown. Audiences loved it, and so making another podcast felt like absolutely the right thing to do.
“Dirty Laundry was an adaptation of one of our stage productions, but this time we wanted to create a completely new and modern drama. We have assembled an amazing creative team of writers, actors, and another director to share the work load. Our highly experienced sound designer Andy Partington has enabled the whole thing to be recorded remotely by actors in their bedrooms. Even our star, Mark Benton, was in a makeshift booth at home. However, thanks to Andy’s technical brilliance, you won’t be able to tell when you listen to the podcast. Making this ambitious podcast has been a huge challenge, but we’ve loved it and we’re very keen
to do more audio drama in the future – even after the Covid-19 crisis has passed.”

Playwright Deborah McAndrew said: “This is first time I have led a team of writers to create a new drama, and it has been an amazing experience. Nick, Victoria, Michael and Georgia have been wonderful to work with, and I’m certain the audience will enjoy the individual stories they have created in episodes 1-4, and their distinct voices. For my own part, I’ve really enjoyed creating the characters of Sam, Harri, Jules, and the mysterious Bev – and scripting a brand new drama podcast for Claybody Theatre.”

Claybody Theatre is a Stoke-on-Trent based company whose work is inspired by the lives and experiences of local people. Founded by playwright Deborah McAndrew and director Conrad Nelson, the company’s work includes the highly successful Ugly Duck, first performed at the Burslem School of Art and then at the New Vic Theatre. Digging In, a play for schools about children of mining families during the 1984-5 Miners’ Strike, and Dirty Laundry (2017) Hot Lane (2018) and The D Road (2019) at Spode Works. Their Award-winning actor, Toby Jones is the patron of Claybody Theatre. 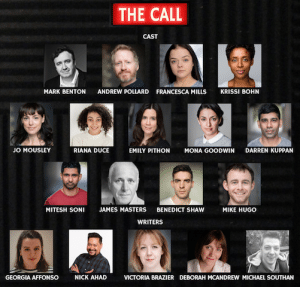 The Call podcasts will be available from 2 November to 6 November. Tickets are Free to access. Visit Claybody Theatre here. Once posted, episodes will remain online for 3 months. Claybody Theatre received emergency funding from Arts Council England due to the pandemic which has helped to support the making of the Call.

The Woman in Black Review

Fashion show with the Angels

Second store in the Potteries for Sports Traider