Pupils from Bursley Academy have been creating scarecrows with thank you messages specifically for keyworkers.

Staff at Bursley Academy, in Bradwell came up with the idea as a way for pupils, and their families, to get involved in an activity at home during the covid-19 lockdown.

Pupils were asked to create the scarecrows and display them at the front of their homes so key workers, and people out on a daily walk, would see them. Shortly after contacting parents and pupils more than 30 scarecrows were made and the numbers are growing.

The idea initially came from Year 1 class teacher Mrs Nathanson, who said: “It’s been amazing to see this idea come to life. Even though we aren’t with the children at the moment it’s created a sense of togetherness whilst setting an activity to keep them entertained and showing our support for the key workers.”

As well as pupils from the school getting involved in the project, parents have informed teachers that neighbours in the surrounding areas have also started to get involved.

Headteacher, Brian Wilkinson, said: “The staff wanted a project that could bring the children and families together, something which when people were out on their daily walks they would see and it could make them smile, as well as something which could celebrate the hard work of the NHS and care staff, as this includes a lot of our parents.

“It has grown from there and as usual our children and families excelled, creating some truly amazing scarecrows and inspiring others in the local community to do the same.”

Bursley Academy would now like to extend this idea outside of the school and would invite anyone who wants to take part in creating their own scarecrows to post pictures on the school Facebook Page https://www.facebook.com/BursleyAcademy/ 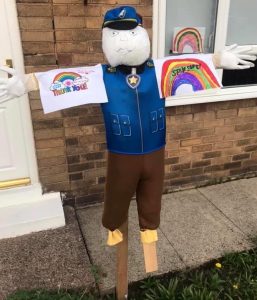 Further £50,000 of funding for Stoke-on-Trent Voluntary and community groups