In recent months Jamie Stonier has been reaching out to more communities online sharing his sign language skills.

The 32-year-old has posted regular videos on social media in which he provided simple demonstrations of every day words, and his latest episodes have also seen the father of two helping to raise money for charity.

“I have been sharing my British Sign Language with people for about four years now,” said Jamie, of Newcastle-under-Lyme.

“I would usually hold free lessons at St John Church, in Burslem but during the pandemic I have been sharing videos online instead. I have had a fantastic response and people seem to really appreciate what I do.”

In July, Jamie has used his videos to help raise money for men’s mental health charity Aware – which coincided with their Men’s Health Week #StandUpForMen campaign.

After setting a target to raise £300, Jamie’s target was reached within a couple of weeks, and he has now helped to raise more than £500 following donations from people watching his sign language videos online. 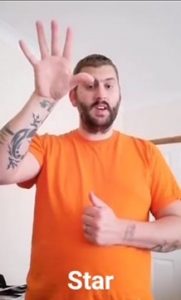 “I have been trying to do a video every day from Monday to Friday, sharing different words which help to make a sentence,” says Jamie.

“Once I started the latest ones, I was receiving a lot of shares on my Twitter channel and it’s been non-stop. People have really got behind me. For me raising awareness of mental health is very important, I have my own personal experience and I read about people committing suicide all of the time in the news and I wanted to try and help as best as I can.”

Jamie adds: “I really want to thank everyone for their support – it really is much appreciated and I can’t thank people enough for their help with this.”

Jamie’s fundraising for this charity has been extended until on 31 August – as of 8 August more than £1,000 so far raised.

Jamie, who was born deaf, is keen to continue with his face to face free sign language sessions in the future. Jamie is also looking to help fundraise for other charities.