Philip Astley – and a continuing legacy

In 2018 Newcastle-under-Lyme was witness to some fascinating and innovative events which focused on the 250 year celebrations of the modern day circus.

Those events were all part of the Philip Astley Project, which was managed by Staffordshire University on behalf a steering group of local heritage, arts, education and statutory organisations and was set up to celebrate the life and legacy of Astley.

Astley was born in Newcastle-under-Lyme in 1742 and considered the founder of the modern day circus. 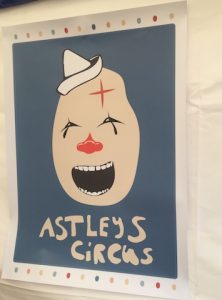 For more than 30 years the Van Buren Organisation have worked tirelessly to celebrate Astley’s heritage not just in Newcastle-under-Lyme, but also globally and are the initiators behind the project.

The organisation has worked closely with the borough’s Civic Society, local councillors and officers from the Borough Council, which has led to various visual reminders of the Astley’s contribution to circus and broader performing arts.

The performing arts centre at Newcastle-under-Lyme College is the home of Van Buren’s bronze Philip Astley statue (pictured in main image), two steel sculptures now sit on the outskirts of the town centre, one on George Street and the other in Silverdale and street art is emblazoned on subway walls.

The steel sculptures which feature horses and a circus ringmaster were built by PM Training and funded through the combined efforts of the Realise Charity and Newcastle-under-Lyme BID (Business Improvement District).

In 2018 hundreds visited the town for family events including Astley Fest, at Lyme Valley Park and The Homecoming which both brought circus entertainment to life. The Homecoming Festival stems from a collaboration with Newcastle BID, Appetite and the Borough Council and it was the fourth year for the circus theme.

In November 2018 the project was duly recognised when the Philip Astley Project CIC, was presented with a gold award for Judges Choice Best Newcomer Award at the Enjoy Staffordshire Tourism Awards. 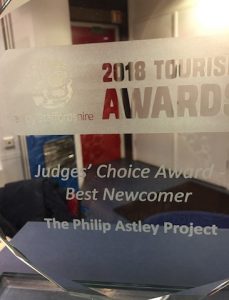 “It was wonderful for the Philip Astley Project team to receive this award and recognition, especially as it not only celebrates the amazing work that’s been achieved in celebrating and raising awareness of the war hero, original ringmaster and creator of the modern day circus – Newcastle-under-Lyme born Philip Astley, but also it shows that the Philip Astley Project has been hugely successful in putting Newcastle-under-Lyme on the global map as an important upcoming cultural destination,” said Andrew Van Buren at the time. “The amazing team effort and hard work is paying off and I’m proud of what’s been achieved by the hard working team, who all care about our amazing part of the country.”

Cllr. Mark Holland, Newcastle-under-Lyme Borough Council’s Cabinet member for leisure, culture and heritage, said about the tourism award: “Astley died in 1814 but his legacy lives on through the popularity of the modern circus which is performed worldwide. He has a unique place in the history of our borough and the Council is supporting efforts to not only improve awareness of Astley and his life but also ensure his memory lives on.”

Andrew Van Buren is himself a world known illusionist and is instrumental in raising awareness for Philip Astley not just in Newcastle-under-Lyme and Staffordshire, but world wide too.

“I’m truly amazed and thankful to all who have collaborated with us, not only within our local area, but on the world stage as far reaching as Monte Carlo and Brazil,” says Andrew. “My life of performing in show business has allowed me to make a great many friends who were happy to lend a hand this year.

“I’m immensely proud of what’s been achieved in the past twelve months, from a Philip Astley Plaque in Monte Carlo to two monuments in Newcastle-under-Lyme. Articles about Astley and his birthplace have been published locally, throughout the UK, plus as far afield as Germany, America and Japan. There’s been shows, talks, exhibitions, so much has happened!”

Andrew Van Buren is as keen as ever to champion Astley further as well as his home town of Newcastle-under-Lyme and Staffordshire as a whole.

He adds: “This is just the beginning – not only for Newcastle under Lyme but all of Staffordshire. Astley can pave the way to even more. I’m determined to make sure the world knows about, not only Astley and his legacy of the circus, but also about Newcastle, The Potteries and Staffordshire and what this wonderful area has to offer. I personally want the area to become a cultural hub, the place to come to if you want to learn not just the skills but also about the history of circus, all entertainment and all allied art forms. Let’s have more shows, add more to the Astley trail – lets shout about how amazing this area is! There are people not only around the UK but worldwide who have already collaborated and supported us, including Prince Albert of Monaco and Princess Stephanie, the Federation Mondiale Du Cirque. The University of Bahia Brazil. All have done – and want to collaborate with the Philip Astley Project and our area into the future.”

Philip Astley’s legacy is one to not only celebrate, but embrace and nurture along with the heritage of his birth place. The talents and culture of Newcastle-under-Lyme, Stoke-on-Trent and Staffordshire deserve a place on the world stage. As Andrew Van Buren says – “This is just the beginning!”

To find out more about Philip Astley go to www.philipastley.org.uk

Erin Gascoigne-Jones has been selected as the new Young Poet Laureate for Staffordshire. The Year 11 pupil from Sir Thomas Boughey...

An incredible space packed full of interesting features in Kidsgrove and a delightful, wildlife- friendly area in Clayton were...

A librarian from Staffordshire County Council’s Libraries and Arts service has been shortlisted for a prestigious national award...

A film, produced by Staffordshire University film lecturers and shot on location in and around Stoke-on-Trent, is to get its first...

Castle Artisan Market – which is held in Newcastle-under-Lyme town centre – is celebrating its first birthday with a...

People from across Staffordshire are being invited to share the stories behind some of their most prize possessions in a new...

Lady Boxers are uniting for a special charity night to raise awareness for domestic abuse. Sixteen ladies from various...

A project which brought forensic science to life online during the pandemic is shortlisted for a global award....