A world class entertainment show is coming to Newcastle-under-Lyme for the first time ever!

A show – which has been seen by more than 3.5million people since it began 21 years ago – is to take centre stage on the Ryecroft in October.

The Greatest Showgirls Tour 2019 – starring the Lady Boys of Bangkok, will be heading to the town centre as part of their 21st birthday celebrations and will be bringing with them their iconic pink Sabai Pavilion tent which will be set up on the former Sainsburys site.

The spectacular show will feature tributes to Kylie, Beyonce, J-Lo, Madonna, Whitney Houston and Rihanna. Two bars and Thai street food will be available in the tent which will have giant Thai statues and a full size Tuk-Tuk inside.

Tour promoter Binky Beaumont said: “Seen by over 3,500,000 people since this amazing cabaret show was created for the world famous Edinburgh Fringe 21 years ago, and the UK’s number one touring cabaret production will be appearing on the Ryecroft site this autumn, in a two hour spectacular West End style show featuring all your favourite pop tunes and worldwide hits.

“Performed by girls like no other girls in over 400 diamante clad costumes, there will also be lots of comedy in our theatre-style cabaret room seating over 400 people on tables of eight. Surrounded by authentic giant Thai statues and exotic plants, our Thai Shak, in the foyer, serves freshly made Thai food that you can take into the main cabaret room along with drinks from our pink neon bars.

“The atmosphere really is amazing as you relax and sing along with our cast in this award-winning theatrical production, direct from Thailand that now tours in the UK nine months of the year and plays 10 city centre sites and over 50 theatres.”

The cabaret production will be heading to the heart of Staffordshire on October 11, until October 26th. 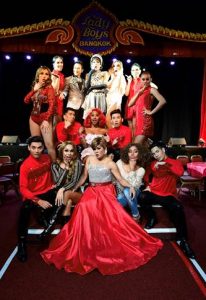 For ticket information head to www.theladyboysofbangkok.co.uk or call 0871 705 0705*

* Calls to 0871 numbers cost 13p per minute plus your network operators access charge.

The youngest Lord Mayor in Stoke-on-Trent’s history as a city has been appointed. Councillor Faisal Hussain, a local business...

An illustrated talk by a TV expert and a brand NEW exhibition is taking place at the Potteries Museum and Art Gallery in Hanley,...

An Awards Evening to celebrate the achievements of higher and degree apprentices has taken place at Staffordshire University. Over...

Green-fingered gardeners in Newcastle-under-Lyme are being invited to enter the Council’s annual gardening competitions....

CELEBRATION EVENTS for the Queen’s Platinum Jubilee in Staffordshire…   An Alice in Wonderland themed tea party,...

Residents can become a swimming teacher for a fraction of the usual cost and go on to secure potential employment at Jubilee2...

A customer service manager with Staffordshire County Council is one of five residents to receive a prestigious personal Honour for...

Residents across Stoke-on-Trent are being made aware of road closures and delays on Sunday 12 June, during the Hanley Economic...

Richard Jacobs Pension and Trustee Services Ltd is marking its 30th anniversary in June by throwing its doors open to local...