The Full Monty Raises the Roof at The Regent

The Full Monty is all about the big ending. Everyone in the packed out Regent Theatre, Hanley knew what was coming, it was why they were there, and the growing sense of anticipation was palpable. Right from the curtain up and through to the grand finale, the cast had the crowd on their side, and they didn’t disappoint.

This is of course the play (not the musical) version of the 1997 hit film and it translates well to theatre. It’s a credit to how well it is written that this production is more than one big (strip)tease. The showstopper ending would not work if the build-up to it had not had quality and depth. There’s gritty issues, gritty language and not-for-the-feint-hearted barrage of jokes.

At its heart, this is about a group of Sheffield ex-steelmen who find themselves jobless when the steelworks close, stripped of their dignity and their purpose. It’s about finding themselves, their identity, their self-respect again, and they do this in the most unlikely fashion by forming a male strip troupe who are prepared go one step further than The Chippendales. It’s their debut performance that forms the climax of the play, but really along the way they bare more of their souls than their chests. 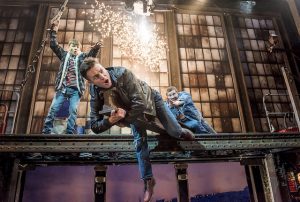 Simon Beaufoy, the writer, was right not to try to update references from 20 years ago, as the themes running through the story still ring true. There is marriage breakdown, father/son relationship, male pride, gay pride, attempted suicide and unemployment – hardly the usual stuff to get a female-dominated audience to turn out on a Monday night. The fact that they do is because it is also about hope, resourcefulness, humour, comradeship and being happy in oneself – and of-course a celebration of blokes getting their kit off.

The audience were a big part of the enjoyment of the night – they are the extra actor who help to make it all work. They weren’t backward coming forward, hollering at Gary Lucy who plays Gaz as soon as he appeared, and fully behind Dave, of cuddly physique, played by Kai Owen. There were genuine gasps as Lomper tried to hang himself, followed quickly by real laughter at the black humour of his work mates. Then there’s a whole host of motherly coos for the tender moments between Gaz and his son Nathan, played with great charisma by 16-year-old Fraser Kelly, who is actually still studying at college in Scunthorpe when not on tour. When Guy (James Redmond) asks Lomper (Joe Gill) out for a drink, there was heartfelt approval and Guy also produces the big surprise of the night, just before the end of Act One, sending everyone into hysterics before they grab an interval drink to recover.

This involvement means that when their strip dance is performed, the audience is really rooting for them. It is not a peep show but a triumph of human spirit. That’s really why everyone is up on their feet giving a standing ovation. Hats off to the cast and production team. The Full Monty is the hottest ticket in town.

The Full Monty is at The Regent until Saturday Nov 24th. Tickets are available from the Box Office, by calling 0844 871 7649 or visiting www.atgtickets.com/stoke

Working from Home with Children – Guest Blog by Claire Nicoll

What to expect when you’re working from home with children around – Guest blog by Claire Nicoll, from Work Best Claire...

Gandeys Circus is back in Newcastle-under-Lyme with an all-new awe-inspiring show! Acts from all across the globe are chosen to...

Following a successful run last year, The 39 Steps has returned to the New Vic Theatre with a bang! First published in 1915, John...

Buddy at The Regent Theatre – Review by Mel Osbourne 4 Stars When I was ten I used to love listening to all my Dad’s Buddy...

Two at the New Vic Review

Two at the New Vic will have you singing, clapping, laughing and crying. Upon entering the round to take your seats, you are...

Aladdin at the Mitchell Arts Centre is very much a Panto with Stoke-on-Trent at its heart. There are references to the Pottery...

Sleeping Beauty at The Regent has glitz, glamour, humour and an all-round fabulous cast. The regular Stokey Christmas panto duo...

The Prince and the Pauper at the New Vic is a festive treat you will not want to miss…. From the moment the play starts the...

Anyone who lives in and around Stoke-on-Trent will know of the A500, also known as the D-Road – a major primary road with...

Approval for next phase of Smithfield project