Staffs Imperial Stormtroopers – a unique group of men, women and children who are spreading joy everywhere they go throughout Stoke-on-Trent and beyond — but why and where did it all begin…?

The year is 2016 – Darren Nield and Andrew Ford stumbled across a TK Stormtrooper suit which was a bit battered and worse for wear. As avid comic hero fans the pair could not let a suit like this go to waste and they took to restoring it… After weeks of restoration work both Darren and Andrew’s comic senses were ignited and the idea of forming a fun group which would also benefit charities was born.

“Once the suit was restored they realised that the costumes were not only fun to wear but also could be used to raise funds for charities,” says member Colin Needham. “Since then, not only did they purchase new kits and build them up, but other people started to join up and Staffs Imperial Stormtroopers was created.”

Founders Darren and Andrew, who had already been involved in charity work before the group was formed, saw the opportunity to attend public events to not only raise the profile of their chosen charities, but also to help share happiness.

Colin adds: “Our founders were already doing charity work and as a group we decided wearing the costumes was not about making money for ourselves. We are all huge Star Wars fans and putting on the costumes is more of a way for us to show our appreciation for the films and characters. What we also realised was they could be used to help those less fortunate than us and can raise a smile for those that at times can find it difficult.”

The non profit group attend various events throughout North Staffordshire and do not charge a fee, but do ask for a donation to be made to their chosen charities. If the event is one hosted by a charity then the comic characters can be seen walking round with collection buckets.

“As a group we aim to bring happiness to the public and raise awareness for the charities we support,” adds Colin. “As for ourselves, it’s the enjoyment we get from putting on the costumes and showing our appreciation for the characters we grew up loving and that new generations are now beginning to love. It’s an amazing feeling knowing all our hard work going into building, sourcing and wearing the costumes can bring a smile to the faces of people of all ages.” 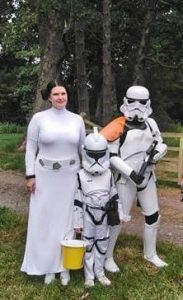 Renamed Staffs Imperial Stormtroopers Inc in 2018 has seen members introduce a wider range of characters. As well as Star Wars characters including Princess Leia, Hans Solo and Jedi Masters, the likes of Indiana Jones and Spider Man can also be spotted at events near you along with Captain America and the Yellow and Green Power Rangers.

Anybody who would like to invite the Stormtroopers to an event or even to join as a group member, go to their Facebook Page @Stormtroopersofstoke and Twitter @ImperialStaffs

Monday’s (March 30) episode of the popular Channel 4 reality TV show Four in a Bed features the Potbank Aparthotel in Stoke...

The owners of a gin distillery in Newcastle-under-Lyme have switched from producing gin to hand sanitiser during the Coronavirus...

Outdoor markets at council-run locations across the city have closed, and new requests for bulky waste collections have stopped,...

Residents are being encouraged to get behind a new community support scheme which has been set up to help meet the everyday needs...

Council provide information for those who cannot work due to Coronavirus

Stoke-on-Trent City Council has produced a range of information covering rent and financial advice for tenants who cannot work due...

The Potters ’Arf marathon has been cancelled as civic leaders urge residents to follow social distancing health advice, in...

STATEMENT FROM PORT VALE FOUNDATION – Re: Covid-19 Due to the latest developments and advice from the EFL and the EFL...

A number of council-run museums, libraries and public toilets in Stoke-on-Trent are to close from Thursday 19 March as part of a...