Penkhull on top of the World

It’s been a whirlwind, it’s been a true sense of community and it’s been an incredible few months for a small village in Stoke-on-Trent.

Penkhull has without a doubt attracted attention not just throughout Staffordshire, not just the UK, but worldwide too.

The reason is a simple one – the Penkhull Flag, which was designed during a village competition in 2018, and is often seen flying from the flagpole in the centre of the village – has gone another step higher and won the World Series of Flags.

The competition, which was run by charity The Flag Institute via Twitter, follows the success of the Penkhull Flag being crowned the winners of the FA Cup of Flags, in May, in another competition run by the same charity.

The Penkhull Flag once again received support from the general public, local businesses and the media to see them win in a nail biting competition against Tiree, a Scottish village, with 51.5% of the votes and crowned World champions. 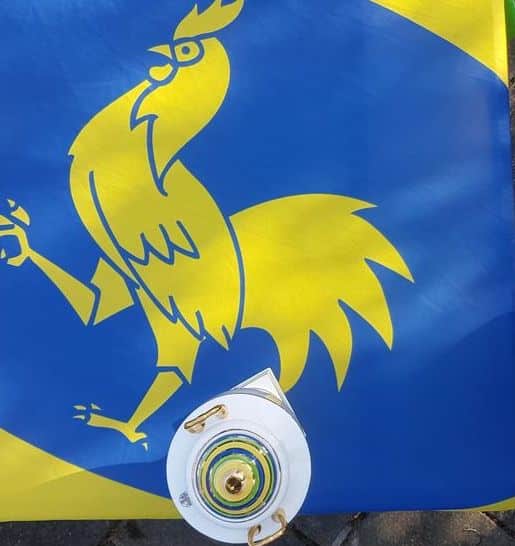 “It’s brilliant,” says Anthony (Brad) Bradshaw, who is one the organisers behind the Penkhull Flag and regularly assists the village’s Residents Association.

“We have had so much fun and the support has been incredible from everyone, we can’t thank everyone enough for helping Penkhull to victory as World Champions.”

Following the win of the FA Cup, Stoke-on-Trent artist Emma Bailey, who is the Director of Emma Bailey Ceramics, designed a porcelain FA Cup trophy replica for the village – a cup sponsored by the Coachmakers Arms, in Hanley.

A World Cup replica has now also been produced by Emma, who says: “The competitions have been a great way for Stoke-on-Trent to get involved in a fun community based competition which with Brad as our manager we were always going to win. It was nail biting stuff and it was great to see the support Penkhull received.”

A Spokesperson from the Flag Institute said: “Penkhull have been passionate and organised in their support throughout all of the Flag Institute competitions. As such they established themselves as favourites early on and their efforts have been rewarded with a hard fought win. It has been wonderful to see Penkhull – and other communities – getting behind their flag so vigorously and make a name for themselves. We hope it inspires many more communities, maybe even Penkhull’s neighbours, to register flags too.”

Community group gets the Royal treatment

National recognition for parks and green spaces in NUL

The Call with Claybody Theatre

Community group gets the Royal treatment