Scenes shot in the stunning Gladstone Pottery Museum will appear in an eagerly-anticipated new series on Netflix.

Crews were at the award-winning Stoke-on-Trent site for more than two weeks in 2020 to capture footage for supernatural show The Irregulars, which is due to be released Friday, March 26.

The museum in Longton, which was dressed in elaborate sets to recreate Victorian London, also saw some rooms transformed into mysterious, unrecognisable locations.

During three days of filming, cast members in period costumes filled the courtyard between the famous bottle ovens – turning the visitor attraction into a bustling street. A real horse, a Victorian police officer, huge baskets of straw and even a creepy animal taxidermy display were among the strange sights where visitors usually walk.

Some of the museum’s volunteers even became extras for the day and dressed up in costumes to help out with the production. Museum staff worked hard with the crew to ensure the project was carried out safely and with great respect for the Grade II* listed buildings.

The Irregulars follows a gang of troubled street teens who are manipulated into solving crimes for the sinister Doctor Watson and his mysterious business partner, the elusive Sherlock Holmes. As the crimes take on a horrifying supernatural edge and a dark power emerges, it will be up to The Irregulars to come together to save not only London but the entire world.

Councillor Lorraine Beardmore, Stoke-on-Trent City Council cabinet member for culture, leisure and public health, said: “It’s so exciting to see a programme like this being shot at Gladstone Pottery Museum. We have a wealth of amazing locations in Stoke-on-Trent and this is another fantastic example of what we can offer to film and TV crews, and a chance to shine a light on our amazing city and its unique heritage buildings. It doesn’t take a detective to work out that Stoke-on-Trent really is the place to be.

“Show’s like this are an amazing boost for tourism and the local economy, and that’s why we’re working really hard to promote Stoke-on-Trent as a must-visit destination for projects like this. Shows such as The Irregulars help to highlight what an inspiring city we have, and what wonderful attractions there are for visitors that you can’t find anywhere else.”

Gladstone Pottery Museum was 2020’s national Small Visitor Attraction of the Year at the Visit England Awards for Excellence.

The site is currently closed due to national coronavirus rules. The city council is planning to open the museum from May 18 in line with the Government’s road map for easing restrictions and more news will be released in the coming months.

Councillor Beardmore said: “My family loves Gladstone so we, like so many others, can’t wait to get back to the museum when it’s able to reopen. The fascinating exhibitions, amazing events and other attractions are second to none and the team are really looking forward to welcoming visitors back when it’s safe to do so.”

(Main image The Young Cast of the Irregulars. Image courtesy of Netflix.)

Other scenes for The Irregulars were also shot at Middleport Pottery in Burslem. 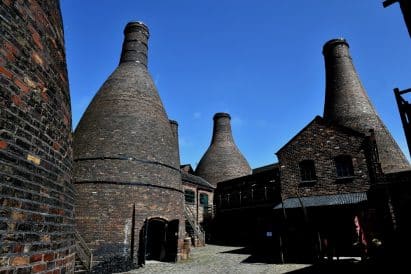