Burslem to Light up the Night

The Mother Town of Stoke-on-Trent is to play host to a spectacular light festival, which will see illuminated performances take over buildings and streets for a three-day extravaganza.

Arts programme Appetite, in partnership with Stoke-on-Trent City Council and the Cultural Forum, bring – Light Night Stoke-on-Trent – to Burslem in January 2019. The programme will see light artworks, projections and illuminated performances take over the town centre’s buildings and streets.

Installations will include a large-scale animated projection on a heritage building in Burslem with artwork by experts Illuminos, who have lit up buildings around the globe. Accompanied by live music from a local choir, the animated projection will bring to life a story about the past and the future of the city.

A night-time procession, Sense of Unity, will also take place and a glowing parade led by a giant illuminated puppet and accompanied by an LED-lit percussion ensemble -Worldbeaters – which has been wowing crowds around the world and will make its way to Stoke-on-Trent.

Visitors will also be treated to a series of hand-crafted fire sculptures as pyrotechnic experts Walk the Plank transform a corner of the town centre with some fiery creations. (Walk the Plank’s fiery maze The Fire Garden, stunned audiences in 2015 when it was presented by Appetite in Hanley Park.)

Deputy Leader of Stoke-on-Trent City Council, who was the lead for the City of Culture 2021 bid, Abi Brown said: “It’s fantastic for us to play a part with our partners in bringing such a world-class cultural and exciting event to Stoke-on-Trent. This is another opportunity to put Stoke-on-Trent on the map and is all part of the legacy from our bid to become UK City of Culture in 2021. The city’s cultural offer continues to go from strength to strength and this is another fabulous date for the diary that families will have the chance to enjoy for free. We cannot wait to see everyone get involved, especially at what is typically a quiet time of year.”

Appetite Director Gemma Thomas said: “Cities around the UK and world have light festivals and we thought it time that our city had one too, particularly following the burst of pride and ambition in the area that came from developing the bid to become UK City of Culture 2021. This is a wonderful opportunity to quite literally shine a light on our city and the beautiful heritage of Burslem Town. We’re working with local residents through the Appetite Supper Club and Stoke-on-Trent Cultural Champions to create a thrilling programme. We hope to see families and residents from the across the city flocking to Burslem to experience it over the three nights.”

Amanda Bromley, Cultural Champion for Burslem said: “This is a not to be missed opportunity for the people of the city and beyond to take part in a three-day party like never before seen on the streets of Burslem, the Mother Town of the Potteries, and show the rest of the UK that Stoke-on-Trent is on the up!” 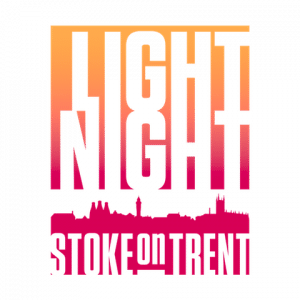 Light Night Stoke-on-Trent is match funded by Arts Council England and Stoke-on-Trent City Council and is being launched alongside ‘Making the Creative City’, a new ten-year cultural strategy for the city and #SOTCulture, a campaign to get more people championing culture.

In the countdown to Light Night, local residents, community groups and businesses will also be encouraged to take part in The Light Night Challenge. Created with Up for Arts, a partnership between Voluntary Arts and BBC Radio Stoke. The Challenge aims to encourage people across the city to get involved in arts activity. Through public workshops and DIY kits, participants will create their own pieces of illuminated art which they can use to light up their windows in an effort to get the whole city glowing during the traditionally gloomy month of January.

Charlotte Foster, Up for Arts Producer, said: “The Light Night Challenge will give everybody in the city the chance to both create and be part of a massive work of art. We’re looking forward to seeing all the windows in Stoke-on-Trent shining with some fantastic creations. We’ll make sure 2019 gets off to a truly bright start.”

Light Night Stoke-on-Trent will take place in Burslem Town Centre from Thursday 31 January to Saturday 2 February 2019. The event is free and tickets are not required. Further details including times and performance details will be announced soon. Find out more by visiting www.appetitestoke.co.uk and join the conversation on social media by using the hashtags #LightNightSOT and #SOTCulture.

A Staffordshire University student has won a prestigious award for a campaign which draws attention to the impact of fast fashion....

Anyone wishing to enter the Hanley Economic Potters ‘Arf Marathon 2023, will be able to receive a £5 off, if they sign up...

A Civic procession, military display and a host of family activities will be taking place to celebrate Armed Forces Day in...

Successful arts programme Appetite kicks off a year-long calendar of activities and events to celebrate 10 years of engaging North...

The Little Vintage Tea Room have launched a brand new competition for children and young people. They are asking for designs which...

Tom, Dick and Harry at the New Vic – a play which grabs you from the start and doesn’t let go – even when you have...

A Vegan Summer Celebration on The Stones

Newcastle-under-Lyme is to welcome the return of a Vegan food festival. The Summer Vegan Festival will take place on Sunday 3...

Hundreds of runners raced through the streets of Stoke-on-Trent for the iconic Potters Arf on June 1. More than 1,600 participants...