The Rocky Horror Show at The Regent – REVIEW

It is that time of year again where Stokies turn up at the Regent Theatre dressed up in stockings, garters and corsets for a rip-roaring night at the Rocky Horror Picture show…Review by Melanie Osborne 5*

The Richard O’ Brian classic musical which inspired the film is back again for a corset clenching whale of a time. First performed 49 years ago in the West-End, this is a show that is always welcomed with open arms in Stoke – where the audience certainly go to town with outrageous costumes and props.

Based on cheesy sci-fiction B movies, The Rocky Horror Picture show tells the tale of Brad and Janet whose car breaks down on the way home from a wedding. They make the mistake of knocking on the door of a random house and end up in a crazy whirlwind of science experiments and insatiable lust!

I last saw this show back in 1999, and I was impressed by how refreshed and up to date it was
without missing the essence of the whole production…In fact, it felt like the world had finally caught up with ‘The Rocky Horror show’ who have been shouting the motto ‘Don’t dream it, be it’ for years and is the reason it is such a much-loved production. 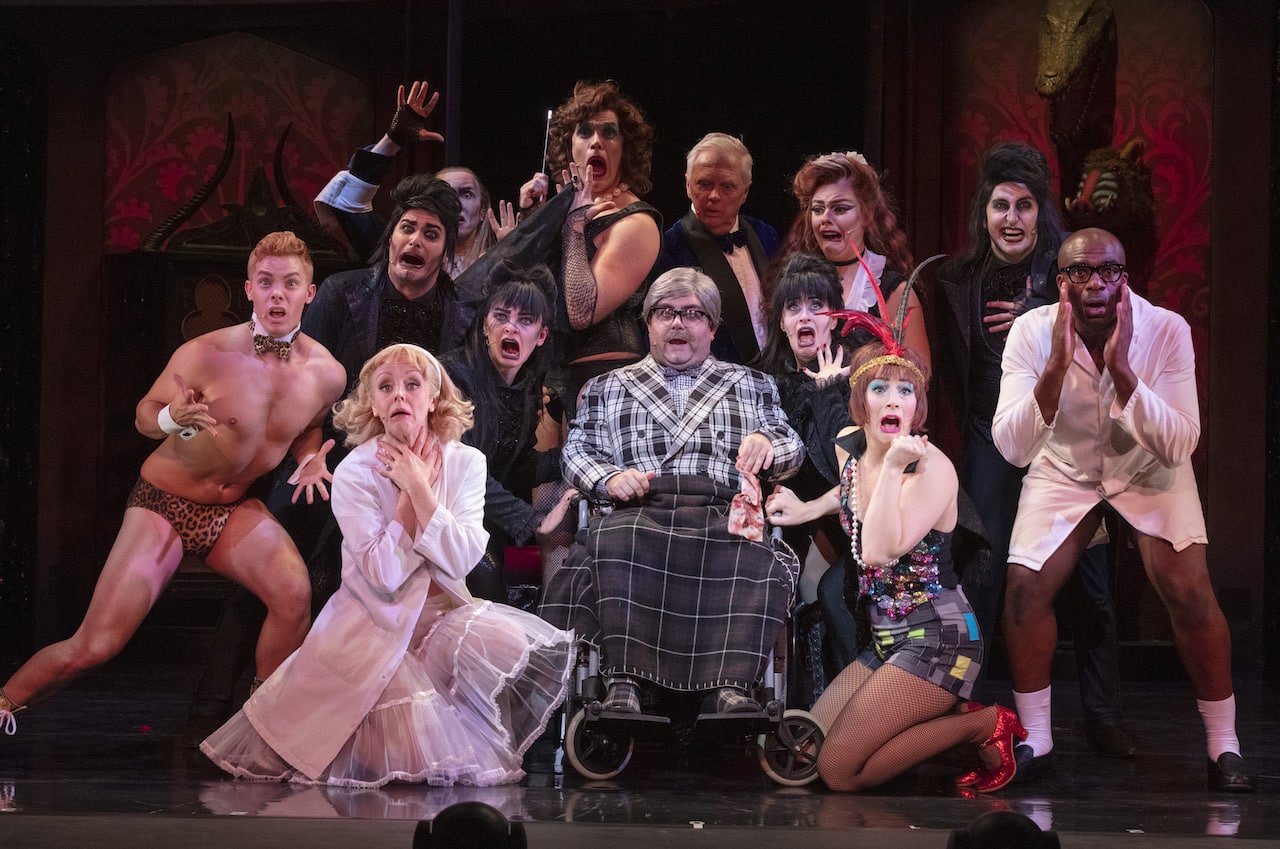 For those who have never seen it before, be prepared for audience participation. Audience members will interact with the script, and you can’t complain to management as this is all part of the fun. The casts’ reaction to the audience is seamless, they must be quick witted and ready with the comeback as anything can happen and it usually does.

Be warned, those sensitive to light may want to dress as a Phantom and don a pair of dark glasses, as
the lighting-  although fantastic – can be very dazzling, but only in small parts and it does add to the magic.

Philip Franks is the narrator and is simply brilliant. He brings the house down with some very near the knuckle jokes and poems and it was a challenge for his cast mates to keep a straight face.

Ore Oduba played a very strait-laced Brad and had a beautiful partnership with Haley Flaherty as Janet whose version of “I want to be dirty” was divine!

The most outstanding performance is Kristian Laverscombe as Riff Raff. Laverscombe has played this role at over 2000 performances and certainly gives the original creator Richard O’ Brian a run for his money. Suzie McAdam also stands out as both the Usherette giving a sublime performance of ‘Science Fiction’ and then as the enchanting Magenta. She injects a big lease of life into this character that sometimes fades into the background.

This is not a show for the faint hearted – so leave your inhibitions at the door when you go in. Expect a
lot of cheese, no forth wall and near the knuckle innuendos.

Fantastic to see a new generation of fans appear each year embracing this cult show as well as devoted fans loyally attending. As ever ‘The Rocky Horror’ didn’t fail to bring the house down and will continue to do so for another fifty years – FIVE STARS from me!

The Rocky Horror Show is at The Regent Theatre until Saturday 18 June. For tickets visit THE REGENT THEATRE