Big names from the world of classical music and musical theatre have been unveiled as headline acts at this year’s Proms and Prosecco in the Park at Chetwynd Deer Park, Newport.

From performing the lead role in Jesus Christ Superstar to hitting number five in the album charts, Jon Moses has built a career as one of the UK’s leading baritones.

Jon will top the bill at Newport’s third annual Proms and Prosecco in the Park as it returns to Chetwynd Deer Park on Saturday, 14 September.

He will be joined by identical “mirror” twins Naomi and Hannah Moxon who have found fame as Classical Reflection. The twins path to success began when they impressed audiences on TV show The Voice in 2016. They have gone on to headline at the Royal Albert Hall and been nominated for a classical Brit Award.

A number of local musicians and performers will also be on the bill at the festival at Chetwynd Deer Park on the outskirts of Newport, which will coincide with the Last Night of the Proms.

Tickets are already selling well for the event, which has attracted almost 2,000 crowds to the picturesque Newport park in late summer for each of the last two years.

Proms and Prosecco in the Park events are hosted by Newport-based Fizz Festivals. Organiser. Esther Wright said: “Our events are aimed at audiences who love live music and are looking for a outdoor event with a twist. We have turned the traditional festival image on its head to create a family friendly environment with great food, children’s entertainment and even clean loos!

“Audience members are encouraged to bring a picnic table and chairs and to enjoy a glass of champagne, or craft beers and ciders. The music is spectacular, mixing top classical musicians with the best talent from West End musicals, choral groups and classic pop – all topped off with a glorious proms finale including rousing renditions of standards such as Rule Britannia and Land of Hope and Glory and lots of flag waving! 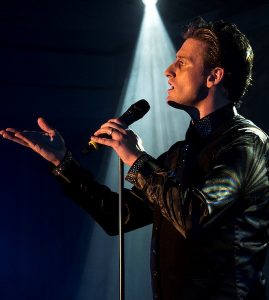 “We’re thrilled to have Jon Moses headlining Proms and Prosecco in the Park, he has a huge voice and impressed Lord Andrew Lloyd Webber who described Jon as exceptional when he reached the finals of the Lord of the musicals’ Superstar search on ITV.

“Classical Reflection are a very exciting vocal duo. Their album, Echo hit number 3 in the Official Classical Charts and was featured on Classic FM and BBC radio.”

Also joining the line-up are Grazia Strings. A professional, classical and electric string quartet, Grazia Strings’ award winning members having performed with the BBC Philharmonic Orchestra, as well as Olly Murs and Gregory Porter. They’ll be performing a mix of classical and pop from Led Zepplin to Vivaldi and are sure to be one of the highlights of the day.

Acclaimed saxophonist Dominic Childs will be joined on stage by pianist Simon Callaghan. Dominic is is much in demand as a classical saxophonist and has toured, recorded and performed with the BBC Symphony Orchestra, Royal Northern Sinfonia, Royal Ballet Sinfonia, Royal Philharmonic Orchestra and the BBC National Orchestra of Wales, including live broadcasts for BBC Radio 3 and performing at the ‘Last Night of the Proms’.

Steinway Artist Simon Callaghan performs internationally as a soloist and chamber musician. His recent tours have taken him to Japan, Malaysia, Thailand, throughout Europe and on two occasions to the Banff Centre in Canada. He has performed at all of the UK’s major concert halls including Wigmore Hall, Royal Festival Hall, Birmingham Symphony Hall, Liverpool Philharmonic Hall, St David’s Hall Cardiff and Manchester’s Bridgewater and Stoller Halls.

The headliners will be supported by a host of popular local performers, with the full programme to be announced shortly.

Esther added: “We have received fantastic support from the people of Newport and the town’s businesses during the past two years, along with attracting music lovers from across Shropshire, Staffordshire and the wider West Midlands area. So many people get behind this event and return year after year to enjoy the unique combination of music, food and fizz.”

“New for this year we have added a covered bar area and have pre-erected gazebos available to hire – perfect for people who want to enjoy the event whatever the weather.”

The Alternative Board mentor scheme at Staffordshire Chambers of Commerce

CAFAG reopens its doors at the Whitfield Valley Centre

One year on for Hanley’s Virtual Reality experience

Penkhull on top of the World

Residents reminded ‘Together – We Recycle’