As the World Capital of Ceramics it is no surprise to discover fascinating creative artists within Stoke-on-Trent.

With an abundance of pottery heritage the City boasts an industry which spans back hundreds of years.

And although the pot banks may not be the bustling work hubs they once were – it’s fair to say there’s without doubt no shortage of artists who reside in the City and surrounding areas.

One of those creators is the undeniably talented Philip Hardaker. Philip took up base in Stoke-on-Trent in 1985 and has spent decades not only digging up ancient and modern ceramic shards, but turning those unused materials into resonating works of art which can be seen all over the City and beyond.

Although not originally from the City, Philip instantly fell in love with Stoke-on-Trent after visiting more than 30 years ago. He decided to embark on his own discoverable career and is very passionate about promoting his beloved home.

“I’ve always liked Stoke and I always wanted to work here,” said Philip. “I really like the lifestyle and the people. I love it – it’s such a wonderful place to live. We went for City of Culture – we didn’t get it – but for me every year is the year of culture in Stoke-on-Trent. We are a very creative city within the arts and ceramic world. There’s so much creativity here. – it’s in peoples blood.” 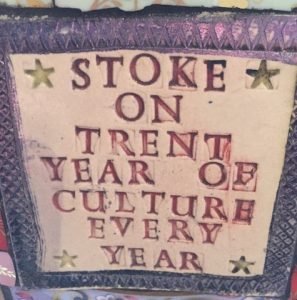 As well as resourcing the majority of his materials naturally, Philip also creates his own moulds which can include elements of heads, animals and aeroplanes. Philip, whose work can be described as sculpture paintings, is very much centred on Stoke-on-Trent and can be seen at various venues and businesses.

“Every project I do is unique to the people I work with,” says Philip. “My work is very much based on Stoke-on-Trent and the ceramics and cultural heritage within the city.”

Philip’s work also captures lifestyle events, both positive and negative, and some of his pieces include reference to tragedies and disasters worldwide.

“I do make pieces which are presented in a positive way after a negative event,” adds Philip. “I also like doing my work, finishing it and then letting it go to have a second chance elsewhere.”

A project in 2018 saw Philip work on a disused piano which was discovered during the Stoking Curiosity Festival – a free festival to build a community of curious people in Stoke-on-Trent and Staffordshire, to celebrate inquisitiveness, spark ideas, and bring people together. The festival, led by Keele University, took place at the historic Spode Works factory site, in Stoke during November 2018. Following the discovery at Spode, Philip was asked by Keele University to transform the neglected piano and it is now encased in a stunning mosaic.

“I feel very humble to have been given this job which has given the piano a second life. It was so obsolete and dead – now it has a second chance,” said Philip at the time.

Professor David Amigoni, Pro Vice Chancellor at Keele University, said at the time: “In holding Stoking Curiosity at Spode, we were always deeply aware of the amazing history of the site. That history finds a wonderful focal point in the Bechstein grand piano which, in the heyday of the company, would’ve been used for entertaining eminent customers and buyers. Although a rather neglected artefact, we knew that the great Phil Hardaker was keen to re-create the piano in his inimitable style as a ceramic artist – which, again, seemed fitting for both the site and the piano. Keele University was pleased to support Phil in realising the piano as a work of art during the Stoking Curiosity festival of ideas where it became a great hit and spectacle for visitors.”

The Pro Vice Chancellor added: “There was also an important educational value to this project because Christine Leung – a student from our BA Hons Media, Culture and Communications programme – was able to use the experience of working with Phil in devising her own creative project towards her degree – and in the spirit of co-production, she has contributed her own distinctive international contribution to the new, emerging artefact.” 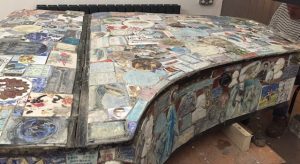 Christine Leung said at the time the piano was being restored: “I’ve really enjoyed working with Phil. He has worked on so many things and I’ve been able to learn more about ceramics in general and also about the culture of Stoke-on-Trent – and I want to learn more – Stoke-on-Trent has links all over the world.”

**Philip Hardaker has an exhibition at the Staffordshire Chambers of Commerce, Etruria, Stoke-on-Trent until 9th August 2019. 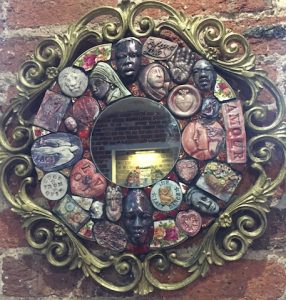 Erin Gascoigne-Jones has been selected as the new Young Poet Laureate for Staffordshire. The Year 11 pupil from Sir Thomas Boughey...

An incredible space packed full of interesting features in Kidsgrove and a delightful, wildlife- friendly area in Clayton were...

A librarian from Staffordshire County Council’s Libraries and Arts service has been shortlisted for a prestigious national award...

A film, produced by Staffordshire University film lecturers and shot on location in and around Stoke-on-Trent, is to get its first...

Castle Artisan Market – which is held in Newcastle-under-Lyme town centre – is celebrating its first birthday with a...

People from across Staffordshire are being invited to share the stories behind some of their most prize possessions in a new...

Lady Boxers are uniting for a special charity night to raise awareness for domestic abuse. Sixteen ladies from various...

A project which brought forensic science to life online during the pandemic is shortlisted for a global award....