Treemendous Exhibition at The Brampton Museum

Talented young artists who submitted the best entries in a popular creative competition have their winning work on display to the general public.

The Brampton Museum is hosting an art exhibition featuring 37 paintings created by schoolchildren in Newcastle-under-Lyme as part of the Council’s annual painting contest.

The theme of this year’s competition – organised as part of the borough’s successful Newcastle in Bloom campaign – is “Bloomin’ Treemendous” in recognition of the “Plant a Bloomin’ Tree” initiative which is creating carbon capture green spaces in urban areas to help mitigate the effects of climate change, contributing towards the Council’s goal of becoming carbon neutral by 2030, as well as enhancing the environment to celebrate The Queen’s Platinum Jubilee. 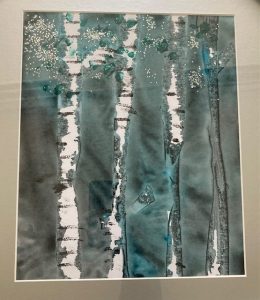 There were 608 entries from 14 primary, secondary and special schools, including two from individuals. The overall winner of the under 7s category is Clark Davis, aged five, from the Demetae Academy in Newcastle who impressed the judges with his dramatic painting of silver birch trees as the dark background really contrasts with the colour of the birch.

Amber Smith, from Thursfield Primary School in Harriseahead, is the main winner of the
over 10s section. The 10-year-old’s entry shows hands gifting a tree to the world which links in perfectly with the Council’s “Plant a Bloomin’ Tree” campaign. 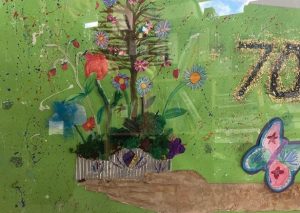 Michelle Hopper, the Council’s Environmental Officer – Community Management – said: “I would like to thank all the children who entered the painting competition. The judges were blown away by the high standard of the entries. There are some very creative children in Newcastle-under-Lyme. Special congratulations go to Clark and Amber, the other winners and also those youngsters who received highly commended awards. I hope they enjoy seeing their fantastic artwork on display at the Brampton Museum. It’s also great to
highlight the vital importance of trees.”

The exhibition runs at the Brampton Museum until Sunday, 24 April and is open from Tuesday to Saturday, 10am to 5pm, and on Sundays from 1.30pm to 5pm. Admission is free and a limited amount of free parking is available.

The winners will receive certificates and prizes from the Borough Mayor at Keele University on 10 June. The painting competition is sponsored by Alton Towers and The Art Studio in Newcastle.