The winners of this year’s Future Journalist Awards were announced during an awards ceremony held at Staffordshire University’s new £43 million building, The Catalyst.

The awards are an annual competition hosted by the journalism department and organised by third-year Sports Journalism students.

Open to young people aged seven to 18, the competition gives aspiring journalists a way to showcase their work, submitting an article, review, or blog, or creating a short video or audio clip.

Danielle Booker, PR lecturer at Staffordshire University, said: “We had a record number of submissions this year, with over 500 entries, and the standard of the work was extremely high.

“Due to the pandemic, this has been our first in-person awards ceremony since 2019 and it’s been fantastic to welcome our finalists and their families and teachers to the university. I think we have some extremely talented young people, ready to be the next generation of bloggers, vloggers, broadcasters and journalists.”

During the ceremony, special guest speaker Laura Watson, business editor at The Sentinel and Stoke-on-Trent Live, shared highlights from her career and provided advice on pursuing a career in media.

“It’s really important that we encourage children to get involved from a young age, so they know what’s expected of them,” said Laura. “There was nothing like this around when I was at school, and I think the competition is a really good way of showcasing the industry to aspiring journalists.”

Sports commentator Seb Hutchinson, who completed a Masters degree in Broadcast Journalism at Staffordshire University, recorded a special video message for the awards.

Seb has worked with the UK’s leading sports broadcasters such as Sky, BT Sport, and ITV, and has covered some of the world’s biggest sporting events, including the Olympic and Paralympic Games, the Rugby World Cup, and the UEFA Champions League.

Each winner received a £50 Amazon voucher and an opportunity to take part in a Newsday experience in the University’s newsroom facilities.

Freya Astbury, a student at Newcastle College, won best written entry for the Years 12-13 category with her article on the Rolling Stones. She said: “I like writing about music, media and drama. After participating in this year’s awards, I am considering studying journalism.

“The new building and the newsroom facilities at Staffordshire University are pretty fantastic!”

Sonya Farrall is the founder of BabaBaboon, who sponsored the written category for the second year running.

“The awards are amazing and a great way to reach out to future journalists. I know how much work and time goes into the awards and the students have, again, done brilliantly. It was great to learn that this year a record number of entries were received, and I cannot wait to see where these awards go next.” 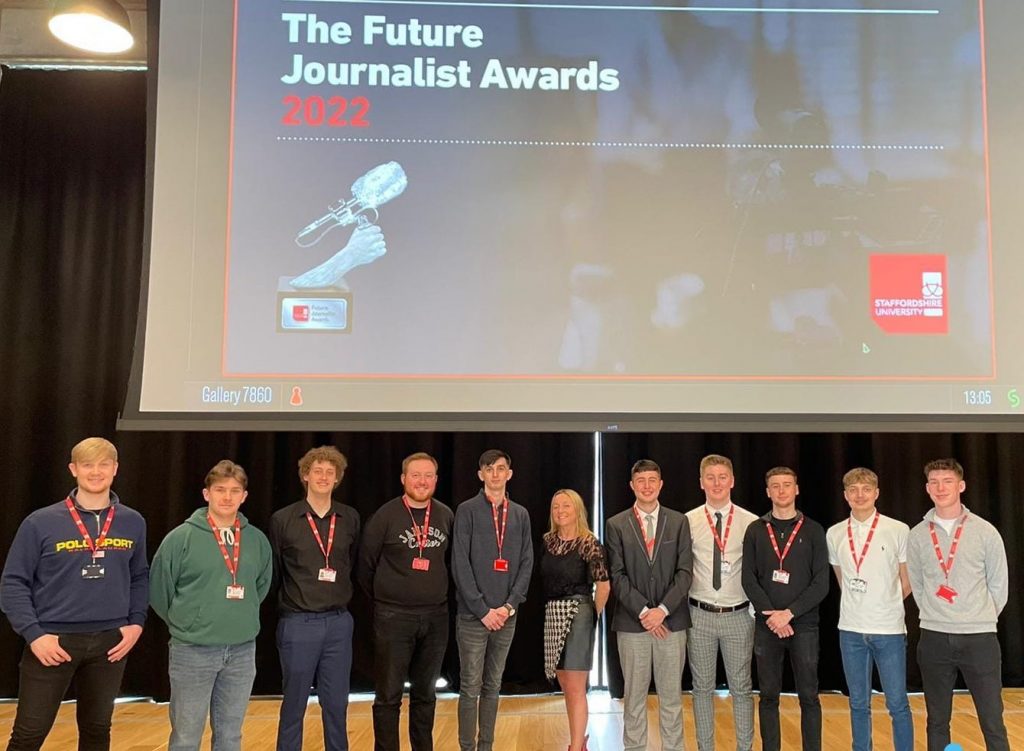 WINNERS OF THE FUTURE JOURNALIST AWARDS 2022