Bernie Webbe – Creating away from Cancer

IN the last 12 years Bernie Webbe, of Newcastle-under-Lyme, has been on a roller coaster of a journey – battling a rare form of cancer which has seen her undergo major surgery and permanent facial disfigurement.

“I unfortunately suffer from a very rare form of cancer which affects something crazy like 3 in every 10 million people,” says Bernie. “I’ve had it 3 times now and the second time resulted in major surgery and major permanent facial disfigurement. Then in October 2017 I was told it had spread to both my lungs and was terminal.”

After the terminal diagnosis Bernie and husband John searched the Internet for help and came across a consultant at the Harefield Hospital in Middlesex.

“It said that they did something called Radio Frequency Ablation and I had this done in March last year on two tumours in my left lung and one tumour in my right lung,” said Bernie. “They like to scan you every three months after the procedure and after six months they found two new tumours in my left lung.”

Bernie is now awaiting to repeat the treatment and without doubt the stresses and worries can be overwhelming – but this mother of two has found a coping mechanism in a passion she has always shared.

“I’ve got a bit, well not a bit, but a full-on fascination with watches,” laughs Bernie of Newcastle-under-Lyme. “I’ve always had a love for them and for unusual jewellery and after buying a vintage watch mechanism online it sparked something in me and I decided to make my own jewellery.”

Bernie’s passion for watches, which led to a passion for recycling them and turning them into keep sakes in 2018, progressed to having her own online shop.

Old mechanisms and watch faces purchased online have now been turned into stunning pieces of jewellery which the mother of two sells in her own Etsy shop – urban8create.

Bernie makes necklaces, earrings, bracelets and broaches and although she hasn’t made any rings yet it’s a possibility there will soon be some appearing in urban8create. 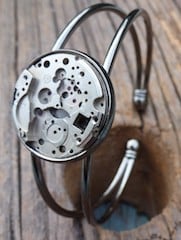 “I love making them and I can turn my hand to anything really,” says Bernie. “I find it all very therapeutic and I really enjoy doing it. I have friends asking me to make things now for gifts for their families.”

As well as exploring her new-found passion Bernie admits the jewellery making has given her a positive focus for the future.

“I have my studio at home now,” laughs Bernie. “It’s great and it has really given me a focus. My councillor at the Dougie Mac said to me the last time I saw her that she’d never had such a positive session with me – it’s really helping. Going into my studio space gives me – me time –  and I can think things through better.”

Over the years Bernie has also raised money for several charities, she has taken part in an Inca Trail Trek in  Peru for MacMillan Cancer Support and done various things for Changing Faces and Cancer Research. As a patient at the Douglas Macmillan she is now hoping to raise money for the North Staffordshire charity through her jewellery sales.

“The Dougie Mac have been brilliant to me,” adds Bernie. “If I’d not been able to speak to my counsellor I don’t know where I’d be – I don’t think I’d have been able to start making my jewellery. They’ve been really good to me and I want to look at donating some of the proceeds from my jewellery to them if I can.”

**You can check out Bernie’s creative designs here www.etsy.com/uk/shop/urban8create

A Staffordshire public relations and communications firm has taken a step forward in developing its media hub. Baba Baboon has...

The Potteries Museum and Art Gallery is welcoming back visitors following its temporary closure due to national coronavirus...

Improvements under way at Tunstall Park

Work on a £729,000 restoration project at Tunstall Park – that will improve the venue for young and old visitors alike – is...

The Telephone Theatre – You Don’t Know Me BUT…

Residents reminded ‘Together – We Recycle’

Stoke-on-Trent Residents are being reminded that recycling correctly is vital to protecting the environment. This Recycle Week...

Dating advice from residents of the state-of-the-art Belong care village in Newcastle-under-Lyme has proved a surprise...

New champions for heritage and allotments

Two city councillors have been appointed to roles to champion Stoke-on-Trent’s heritage and thriving allotments facilities....

Calling all ginger cat and dog owners, a unique festival wants you to shout about your beloved pets. The fourth annual Ginger...

Work on the stunning new glass gallery that is set to become home to the Stoke-on-Trent’s Spitfire has hit new heights....

Improvements under way at Tunstall Park