The 13-year-old from Newcastle-under-Lyme first started to compete in Kickboxing tournaments in 2016 and since then he has gone on to win a whole host of belts and trophies – in the UK and abroad.

In November 2018, Oliver competed in the ICO World Championships, which took place in Rome where he scooped six gold medals and one bronze.

In the same year the young star was runner up at The Sentinel Sports Awards in 2018, won the Newcastle-under-Lyme Borough Council Junior Sports Man of the Year, and also fought in his first boxing match which he won at the Kings Hall, in Stoke.

In 2019 Oliver stepped up in his kickboxing weight and the start of 2020 saw another raft of accolades added to his collection across multiple sports.

Then on March 7, Oliver was crowned the winner – by a split decision – at the Five Nations Kickboxing event which took place in Brownhills, Walsall and also won at the G-Force open the same weekend. 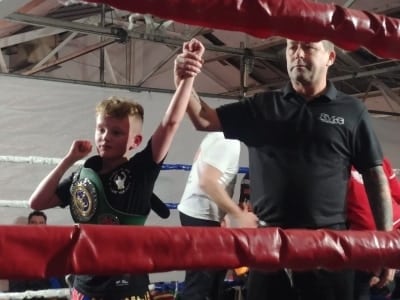 Oliver, who trains at T6 Gym in Burslem and at Adrenaline Fight Academy, Brownhills, said: “I really enjoy my kickboxing and I love to compete in the tournaments.

“Training can take up a lot of time but I enjoy it and I know it’s important and I know it is also important to take a break. I have a lot of support from my family and friends, as well as my sponsors and I really want to thank them for their help – without them I wouldn’t be able to do what I do.”

Oliver is now aiming for a shot at a European kickboxing title with plans to compete later in 2020 and 2021.

He said: “I really would like to go for a European title now – it would be amazing and I will do my best to win.”

Dad, Martin adds: “Oliver trains really hard and we are all very proud of him. His younger brother is also starting to get into kickboxing now too and has seen what Oliver does.

Oliver Clarke is a dedicated young sportsperson who is making waves in the kickboxing world and will continue to do so – well done champ!

Celebrating 10 years of growth at UK Business IT

More than 1,500 laptops to help pupils learn through lockdown