At aged 11, Oliver Clarke of Newcastle-under-Lyme is dominating the kickboxing ranks both at home and abroad.

The last 12 months have seen Oliver win seven world open titles in a sport he loves as well as being recognised at several awards events.

It was 2016 when Oliver started to compete and since then he has also racked up more trophies than Real Madrid.

“I feel really proud of myself,” says Oliver. “I’ve won more titles than I did last year and that was my aim. I got two world titles in 2017 and in 2018 I have seven world titles.”

In November 2018, Oliver competed in the ICO World Championships, in Rome where he won six golds, and one bronze medal.

“I really enjoyed Rome, there were a lot of people the same age as me and we were able to talk about our fights together because we all understood,” said Oliver. “I learned a lot from there.”

With 60 trophies and belts galore, Oliver is without doubt dedicated to his chosen sport, but at the same time he appreciates each day is a learning curve and there is always room for improvement.

He said: “I’ve learned a lot this year. Last year I used to really sulk if I didn’t win and I would be gutted. But now I know you cannot win every time, and you learn that. I don’t sulk anymore – you live and learn and I’m learning more about my sport.”

In 2019 Oliver will be stepping up in weight and the youngster is all set for the new challenges ahead of him.

Dad Martin said: “He is stepping up from,-30 to -35, which will mean him having harder fights – he will be going up to the next calibre now and coming up against the best of the best.”

“Yes, I will be going into the next category,” adds Oliver. “It’s going to be harder but I’ll be doing my best and I want to go on to win more titles next year.”

The young star, who was runner up at The Sentinel Sports Awards in 2018, and also won the Newcastle-under-Lyme Borough Council Junior Sports Man of the Year, also fought in his first boxing match this year which he won at the Kings Hall, in Stoke.

Although Oliver has no immediate plans to enter the boxing ring again in the near future he enjoys training in both sports at T6 Fight Club, in Burslem.

“I like the boxing training because you can work out where to move your hands and with the kickboxing you are more faster on your feet – so learning both can be helpful,” Oliver said. 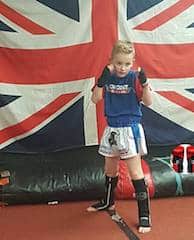 As a dedicated sportsperson, Oliver has been training up to six times a week and in 2018 he received great support from coach Rob Ball, at the Warsaw based Fight Shack, as well as at T6. For 2019, Oliver will remain more local to coincide with school hours, and will continue at T6 with coaches Dave Morgan, Shane Porter and Matthew Wood – where he has also become somewhat of a role model.

“He trains so hard and I’m really proud of what he’s achieved,” says Martin. “When his friends have been going out he has been training and he sacrifices a lot for his age. He goes and does his training because he wants to do well and he knows his training is important.

“He is looked upon like a role model by the other kids at the gym. They see what he’s doing and they want to do it too.”

“We really want to thank them because we have some really good people supporting us and we appreciate it so much!”

Oliver Clarke is dominating the kickboxing ranks – challenges will come up – but there’s no doubt this talented young sports star will go on to represent not just his home town, but also his country in a kickboxing world he deserves to be in!

**Oliver is due to fight in the Prime Fighting Challenge, on April 6th 2019 at Knutton Workingmens Club, in Newcastle-under-Lyme. For more information please contact Martin Clarke on 07920224695.

A young man with Asperger’s syndrome has found his ideal job thanks to a successful work experience programme delivered by...