A memorial garden in the heart of Stoke-on-Trent, complete with sculptures, is to be home to an international effort to remember the tragic events which befell the small Czechoslovakian town of Lidice during the early part of the Second World War.

Local community champions and business owners Alan, and Cllr Cheryl, Gerrard are leading the way with the Lidice Lives campaign in paying homage to the town and its people, continuing a mission which was first started by Potteries icon, Cllr, Dr Barnett Stross.

Speaking of the history behind the Lidice Lives movement Alan said: “It is most definitely a long-term project, which I’ve been working on for about 10-years. I knew about Lidice and what happened to the village, but It was after, a decade ago, I found out about the link with Stoke-on-Trent. Lidice was completely destroyed, as a reprisal by the Nazi’s for the assassination of Reinhard Heydrich as a result of operation Anthropoid. The men of the village we executed, the women sent off to concentration camps and the majority of the 82 children were gassed, and, on Hitler’s orders the village was bulldozed and wiped off the face of the earth.

“So, the connection here is that Dr Barnett Stross who was also a councillor for Shelton said just three days after the atrocity in June, 1942, that if he was the mayor of Stoke-on-Trent he would immediately start a fund to help rebuild the village. It was that which kick started the movement. It was after that the North Staffs Miners and its federation got behind it and started Lidice Lives.

“With such a strong connection to Stoke-on-Trent which has seen that initial campaign from 1942 grow over the decades to become a very national and international project, the Garden will be a place of which to remember the events which befell the residents of Lidice and also to show the connection and support the people of Stoke-on-Trent share with the village.”

Continuing work on the garden Alan, who has visited Lidice on several occasions added: “In the past we have worked on bi-lateral projects, with local artist Philip Hardaker, creating sculptures for Lidice. As for the garden, it is on a piece of land given to us by Tesco, on Morely Street and there will be contributions coming in from three sources to mark the efforts of those involved. First of all there will be pieces from other UK cities connected to Lidice such as Birmingham, Coventry and Derby plus many more. Then there’s pieces coming from other international towns which have, like Lidice, been affected by similar atrocities such as Putten, Netherlands and Telavag, Norway, all we hope to get contributions from whether it’s a sculpture of a rose bush.

“There are also communities in the US and South America who are connected to Lidice who will hopefully be sending stuff in. And then there are the women who have been christened Lidice too, who know about what we are doing and want to be involved. I’m also hoping that the local authority will choose to be involved too and ultimately the Lidice Lives campaign is a grass root one and It’s all about acknowledging our friendship with the people of Lidice and how the project has seen other friendships with Stoke-on- Trent grow as a result.

“Ultimately it is about peace and friendship and I know that the people of Lidice have never forgotten the work which the people of Stoke-on-Trent did in helping to rebuild the village.”

If you wish to find out more about Lidice Lives and the Garden on Morley St you can get in touch on Facebook and Twitter @LidiceLives, and also @Legacy Garden on Facebook and by contacting emailing: lidicelives@gmail.com 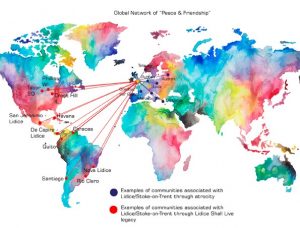 Have a road trip not a road tip: council teams clean up to twenty-three tonnes of litter from A50/A500 corridor

Businesses share green expertise to save carbon and money