YOUNG people from Stoke-on-Trent have decorated the indoors of the largest reuse furniture store in North Staffordshire as part of a community project.

Members of a National Citizen Service (NCS) group spent hours fundraising for paint and stencils to help paint quotes on the indoor walls of Emmaus Furniture Mine in Hanley.

The National Citizen Service is a government programme which was advertised throughout schools earlier this year and had numerous providers including the YMCA North Staffordshire, who had 47 groups across Stoke-on-Trent and Cheshire during the summer.

During the first two weeks of the programme, members of the YMCA groups took part in activities such as public speaking, workshops, and a musical talent show. The final two weeks of the programme invited participating 15 to 17-year-olds to create their own social action project. It was decided by one of the YMCA groups to raise awareness for homelessness and they chose to support Emmaus Furniture Mine.

Emmaus is a unique charity which enables people to move away from homelessness. Emmaus North Staffs aim to become the 30th Emmaus Community in the UK by developing residential accommodation and the first in the country that will not take housing benefit. Furniture Mine is the social enterprise in which members of the charity can learn employment skills as part of their journey away from homelessness.

As part of their social action project the YMCA group painted quotes taken from Emmaus founder Abbe’ Pierre onto paper and then posted them onto the walls inside Emmaus Furniture Mine.

Becky Winstanley, team leader of the YMCA group involved in helping to raise awareness for Emmaus said: “A lot of young people in our group are aware of homelessness in the city of Stoke-on-Trent and a lot of people wanted to help Emmaus for that reason. Our group is aware of different places in Stoke-on-Trent that help the homeless and it was the idea of Furniture Mine which interested them. People were intrigued by Emmaus and wanted to see what they could do to help. Emmaus Furniture Mine looks to help people who are going through the transition of being homeless and it’s giving people an aspect of hope who have been having a really tough time. Emmaus is a really great charity and is helping so many people in so many ways. By putting the quotes inside the Emmaus Furniture Mine shop we are trying to show that there is hope and people can get through the really tough times – and Emmaus can help them get through it.” 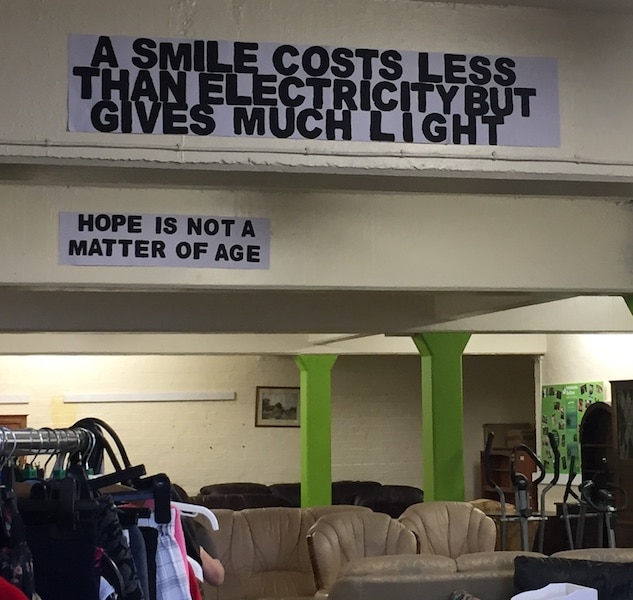 As well as taking quotes from the Emmaus founder, the NCS YMCA group also posted reviews from people who have been helped by the charity.

John Webbe, Executive Lead of Emmaus North Staffs and manager of Furniture Mine said: “It was great to welcome members of the NCS project into our store and they have done a great job. We were delighted they chose to support us as part of their social action project and now we have inspirational quotes from Emmaus founder Abbe Pierre on our walls. Unfortunately the group couldn’t paint directly onto the walls due to health and safety reasons, but we are now looking for a local artist to help us to do this so they will remain permanently. The quotes are very powerful and we want our staff and shoppers to be able to read them every single day.”

James Hulson-Beech, NCS Project Leader at the YMCA, said: “Young people have a certain reputation in today’s society, and it’s great to be able to show people what young people in the area have to give. We have been raising thousands of pounds across the city for homelessness, period poverty, defibrillators, food banks, care packages and many more. Becky’s team was very passionate and they really wanted to make an impact. They have done a brilliant job and it’s great to see.”

James added: “The teams learn so much about themselves on NCS, and for many it becomes a life changing experience. I hope they use NCS as a boost for their futures. I’m proud of all of them.”

Becky’s group also chose to make essential care packages from their fundraising which were donated to Manna House at Hanley Baptist Church.

#LoveLocal on The Stones Newcastle-under-Lyme

Lockdown business is a bestseller

Every other Seat takes centre stage in Newcastle-under-Lyme