Diane Leopard – The Emotional Impact of Cancer through Images

Diane Leopard of Endon explains her journey through cancer and how she is helping others in Staffordshire.

Whatare your thoughts when you see a crumbling castle? Once a strong and bold structure falling uncontrollably to the ground bit by bit – an historical structure giving way to the strains. Is it a sign of ageing, or even a weakness that the crumbling brick and stone portrays?

For Diane Leopard this is how she felt after being diagnosed with breast cancer – the moment her world came tumbling down in an instant.

That was 5 years ago and now the complementary therapist is using her own, and others experiences, to help explain what it feels like when a family member, friend or colleague, is diagnosed with a potentially terminal illness.

Diane isn’t doing this in just words however – instead she is using poignant images – photographs she has taken herself – like the crumbling castle – to deliver a message and understanding. Since 2017 Diane has held presentations at various charity events including at the Dougie Mac, in Stoke-on-Trent, as well as at Cancer Support Groups and at Stoke-on-Trent City Council, and she is keen to continue spreading awareness.

“I do a thought provoking, unique and  original presentation using non-clinical photography to describe the significant emotional impact a cancer diagnosis has,” says Diane. “The talk is a reflection on  personal experiences and shared information from other cancer patients. The aim is to help health care professionals and the public to understand the significant emotional impact a cancer diagnosis has on patients and their families.” She adds: “A crumbling castle is how you feel when you’ve been diagnosed with cancer – that’s how I felt, and the image I use has people in the foreground going about their lives as normal, but you’re crumbling.”

In 2015 Diane a former volunteer at The Dougie Mac was awarded the Federation of Holistic Therapists prize for Excellence in Practice. With the prize money she bought a camera, then enrolled onto an Adult Learning Photography Course with Stoke-on-Trent City Council. An end of term project was a portfolio of photographs telling the story of ‘A Journey’. “Having undergone treatment for breast cancer in 2013 I decided to reflect on my personal cancer journey through nature photographs,” says Diane. “At the end of the evening another student came and said thank you, you’ve really helped me to understand what my father must have gone through – I felt so touched by this comment, I didn’t realise it would resonate with others so much. I guess at the time I was also reflecting on my whole journey after being diagnosed with breast cancer and I thought about all of the emotions and feelings I’d experienced. It wasn’t until a while later I showed colleagues and friends and they said it was the best talk they’d heard and suggested I expanded it. I now have between 35 and 40 photographs I use to describe the emotional impact of a cancer diagnosis.”

Diane, of Endon has incorporated various different images which she hopes others can relate to including a road at the Roaches – in which she describes the uncertainty felt and not knowing where her personal journey would take her next. There’s also an image of a colourful flower tunnel (see image below) to represent treatment and hospital staff who are there to help along the way. A beach is used as a symbol of feeling insecure when treatment has finished. Diane adds: “You suddenly feel insecure, you’ve been stuck in a bubble of appointments and then people expect you to celebrate when your treatment comes to an end – but you feel isolation too. Everybody’s treatment is different, but everybody goes through similar emotions and questions. You can feel physically and emotionally exposed.” 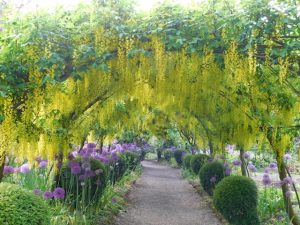 Diane, who runs her own  business, Hands 4 Wellbeing, aims to spread awareness of the emotional impact of being diagnosed with cancer. On February 16th she will be a guest speaker for the Pink Sisters at an event to be held at Port Vale Football Club.

For more information on Diane’s talks please go to www.hands4wellbeing

The youngest Lord Mayor in Stoke-on-Trent’s history as a city has been appointed. Councillor Faisal Hussain, a local business...

An illustrated talk by a TV expert and a brand NEW exhibition is taking place at the Potteries Museum and Art Gallery in Hanley,...

An Awards Evening to celebrate the achievements of higher and degree apprentices has taken place at Staffordshire University. Over...

Green-fingered gardeners in Newcastle-under-Lyme are being invited to enter the Council’s annual gardening competitions....

CELEBRATION EVENTS for the Queen’s Platinum Jubilee in Staffordshire…   An Alice in Wonderland themed tea party,...

Residents can become a swimming teacher for a fraction of the usual cost and go on to secure potential employment at Jubilee2...

A customer service manager with Staffordshire County Council is one of five residents to receive a prestigious personal Honour for...

Residents across Stoke-on-Trent are being made aware of road closures and delays on Sunday 12 June, during the Hanley Economic...

Richard Jacobs Pension and Trustee Services Ltd is marking its 30th anniversary in June by throwing its doors open to local...