Artist Ian Pearsall and his work of the people

“Life is not a dress rehearsal,” says artist Ian Pearsall when asked what advice he would give to someone who wishes to pursue their dreams.

This is a quote which many of us may have heard before, yet the meaning behind the words could also mean so many different things to each of us. But, those same words do have a truth about them which we can all understand.

As a young man, and a Furniture and Product Design Graduate, Ian always knew he had a passion for drawing, a passion to be creative, a passion for art. But after months of hauling his portfolio around London, in search of an all-important break, it soon became apparent the doors Ian was hoping would open did not exist at that time.

“I hauled my portfolio around London to be told that whilst my portfolio shone brightly, there was no money in belt-tightening studios in London unless I put my foot in the door and worked for nothing, or until opportunities came up in new economic circumstances, or I was to go back to the great creative city I set out from – Stoke-On-Trent,” said Ian.

Upon returning to The Potteries, Ian pursued his career but came up against more obstacles. Bosses from local manufacturing firms offered their praise for his work but refused to allow the determined individual loose with their products, which eventually forced a frustrated Ian into a different professional direction.

“Design studios flatteringly told me that my work was too exciting for plates, and that I’d be bored’ – words that resonate with despair,” said Ian. “I purchased a video camera and started making stop-frame animated films to fill the time and through chance I filmed a friends wedding, and started a production company. I won an award from the Prince’s Youth Business Trust and hooked up with a big production company in Birmingham where I wrote storyboards, scripts and ended up making some good promotional videos.”

Through the production company Ian completed projects for Portmerieon Pottery, Staffordshire Enamels as well as filming weddings – but the same love and passion was not the same as it was when creating drawings. After folding the production company Ian waved goodbye to the video cameras, and reluctantly put down his artistry pencil before going on to work as a labourer in Stroke-on-Trent for the next seven years. But the artist inside him was never put to rest and it was by chance when walking his dog one day around West Port Lake, in Burslem, when Ian’s creative desire struck back with a vengeance.

He said: “I spotted a bottle kiln and ventured over to it. I marvelled in it’s architectural significance, photographed it and wondered how many more of these there were to be found in this city. I became curious as to how many in my distant family owed their lives to the Pottery industry and before long I produced ‘The Magnificent 47’ – my photographic homage to these fantastic structures. It’s home is the Barewall Art Gallery, in Burslem because Amanda Bromley, in her enthusiasm for it, unknowingly kick-started my creative desire back to overdrive.”

Ian then spent five years touring Stoke-on-Trent researching listed buildings and architecture adding to his new found portfolio along the way. But it was also the communities and experiences connected to the historical industrial workplace which fascinated the artist and it was from here he has been able to create something quite remarkable.

“People look at my work and say that’s me in that picture, in the place I grew up or I remember when it was like that,” Ian said. “I draw on my original photographs of this unchanged city and there is still plenty of it, I reference its context from old maps and relish in descriptions of life from people who were in the thick of the industries, family stories. I don’t produce work to meet a market demographic that sells, I paint and draw what I’m interested in and people come to it. I like to think I’ve walked and re-walked every inch of this city and there is new inspiration every time I do so – it’s all out there like a deep well of inspiration.

“My research draws on the old stories, it jumps out of the old maps and photographs and I rebuild lost streets, and reconstruct distant memories from the minds of those who remember the gritty gravitas of working life in pot banks and coal mines and stories passed down to them through generations who lived through the sheer primitivism of an industrial landscape of a city. I connect with it because I labour in this city – patrons of my work say that my pictures show real people under the burden and pain of heavy labour – I’ve lived to the clocking machine in pottery factories – it was heavy and it was real. I’ve lived my art.”

Ian’s work, which can be viewed at Trent Art Gallery, Brunswick Street, in Newcastle-under-Lyme, has received appreciation from all walks of life and himself and writer Dave Proudlove collaborated to produce the book – Ballad of the Streets. The book, which is an illustrated autobiography, tells Dave’s story about growing up in Stoke-on-Trent and came about after the pair were introduced by mutual friend Lindsay Bainbridge, who is also an active promotor of Ian’s work.

Dave said: “Ballad of the Streets is a look back at my coming of age in a working class neighbourhood.  It is a love letter to it’s people and the lives we lived together. It is also a look at the human condition in a place without definition. It is part memoir, part social commentary, laced with emotion and dark, dark humour.”

Ian Pearsall is more than just an artist, he is a creator of the reality we have all shared from child to adult in a City which offers more inspiration than some might believe. Ian believed in his creativity, he tore down the barriers and is living the creative life he was always destined to achieve.

**A unique exhibition is at Valentines Clays, in Stoke-on-Trent showing Ian Pearsall’s latest work along with work from other artists. The exhibition runs until 29 November 2019. 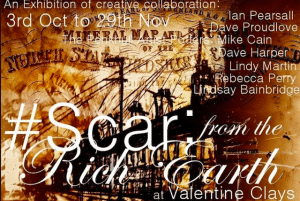 A young man with Asperger’s syndrome has found his ideal job thanks to a successful work experience programme delivered by...