Archaeologists studying bottle ovens at a former pottery works have made a ‘significant’ discovery after new information emerged about the structures.

Investigations by the team working at the Grade II listed Phoenix Works site, in Longton, have revealed that the two bottle ovens on site are not, as previously believed, up-draught types, but actually down-draughts that are connected to the adjacent 90ft chimney.

The discovery is significant as previously only three down-draught ovens were thought to survive in Stoke-on-Trent. Down-draught ovens first appeared in the Potteries during the second half of the 19th century and offered a more efficient way of firing pottery than the more traditional up draught counterparts. Unlike up-draughts, down-draught ovens recirculated heat within their  firing chambers, ensuring that wares contained within were exposed to heat for a longer period.

Heat and gasses were eventually drawn from the chamber via vents in the floor and, in the case of the examples at the Phoenix Works, out through underground flues to a separate chimney. Although one other site in Stoke-on-Trent features down-draught ovens that are still standing, those at Phoenix Works are now recognised as the only surviving examples in the city to have utilised this particular technology.

The discovery is part of work taking place under the Stoke-on-Trent Ceramic Heritage Action Zone (HAZ), a five-year long heritage-led regeneration programme focused on Longton Town Centre Conservation Area and the city’s surviving bottle ovens. The scheme is being delivered by Stoke-on-Trent City Council and Historic England, alongside local and national partners. It comes as the owner of Phoenix Works has been successful in bidding for a Historic England Repair Grant for the site’s chimney, with work due to start later this year. 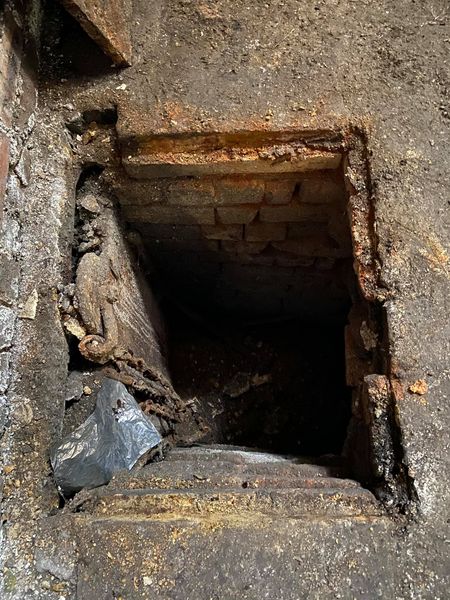 Cllr James Smith, the city council’s heritage champion, said: “These iconic structures are a symbol of the Potteries and have been a great source of inspiration to many artists and creatives over the years. It’s wonderful that even in 2021, our archaeologists are still learning and discovering new things about them. We now have a unique down-draught oven which uses a particular type of technology that does not survive anywhere else in the city and I think that is fantastic.”

A total of 50 bottle ovens spread across 29 sites remain across Stoke-on-Trent, including muffle kilns and calcining kilns as well as up-draught and down-draught type potter’s ovens. Surveys of all the remaining bottle ovens are ongoing as part of the HAZ in order to provide both a better understanding and a lasting record of these iconic structures as well as to support their future conservation. HAZ partners Staffordshire University, Liverpool John Moores University and Keele University are contributing with 360 degree photography and laser survey at a selection of sites, including at Phoenix Works this week.

Cllr Smith added: “It’s important we celebrate our city’s heritage and culture and do all we can to maintain and preserve it wherever possible. The Heritage Action Zone is one way we are doing this, and it’s great to be working with partners at a local and national level who have the same goals. The works to repair the 90ft chimney at Phoenix Works will be quite a sight when they start later this year and I’m looking forward to seeing that get under way.”